Kaoru is seen pondering about his engagement with Aoi and the scene switches to a flashback. Aoi is shown to have prepared lunch and Kaoru commented how delicious it looked. Aoi states that she is not too good at cooking, but Kaoru denies that. Aoi, happy, says she will stay here and cook dinner for Kaoru, too. Kaoru, puzzled, saying that he thought she was going back today, but Aoi said that she had called home and they allowed her to stay longer. Aoi says she will have dinner ready by the time Kaoru is home and Kaoru goes off to school. The flashback ended and Kaoru is approached by two of his friends who remind him to attend a meeting. He states that he has something going on and can't go. When thinking about what to explain, an idea of him introducing Aoi to them as his wife appears. He quickly dismisses the idea and runs away, saying he will come to the next meeting. Aoi is seen waiting for him at the train station and when asked why she was there, she says that she wanted to be with him as soon as possible. Aoi asks to hold Kaoru's hand and he agrees, with the two walking home while discussing about how much each other have changed. Kaoru is seen eating Aoi's food, saying how delicious it is. Kaoru later says he survives by eating bread crusts when asked by Aoi, who commented on how unhealthy it was. He realizes Aoi has made all his favourite foods and she comments on how much she knew about him. She says she wants to do a lot of things with Kaoru as long as he wants it. She wipes off a rice on his face and comments on how happy she is seeing Kaoru enjoying her meal. Kaoru is later seen in the bath, thinking about Aoi before he heard Aoi asking whether she can wash his back and wants to go in. 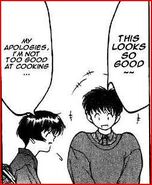 Sorry I have something on...

This is my wife 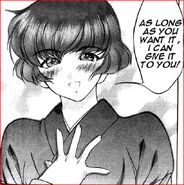 I can give everything to you!

I am going to wash your back...
Add a photo to this gallery
Retrieved from "https://aiyoriaoshi.fandom.com/wiki/Dinner?oldid=4698"
Community content is available under CC-BY-SA unless otherwise noted.