Aoi thanks Kaoru for the bath she had, making Kaoru blush. Kaoru denies when she asks what was wrong. Kaoru then tells Aoi to sleep on his futon while he sleeps on the floor. Aoi at first immediately rejects this idea, but after sometime, finally agrees. Kaoru then tells Aoi to go home tomorrow morning, as her family might be worried for her. The idea of being engaged was sudden and she doesn't know much about him, too. Aoi then protests by stating that she wants them to get to know each other. Kaoru blushes and cuts the conversation by telling her to get to sleep. When Aoi falls asleep, Kaoru checks the note containing his fake apartment address and thinks of how much Aoi had treasured it. He starts having thoughts about Aoi, making him blush and he decides to go out and buy a drink to calm down. When he came back, Aoi was awake and said that she was worried seeing him gone. Kaoru reassures her and the two sleep. Kaoru starts having nightmares about his mother leaving him and his grandfather not caring and even slapping him. He was tearing when he wakes up and finds that he is being hugged tightly by Aoi while he struggles. When Aoi wakes up and is questioned, she just wanted to warm him by hugging him. She apologizes for her bad habit of hugging people tightly while sleeping, but says that she and Kaoru are even, as Kaoru hugged her in sleep, too. Kaoru blushes at her remark and denies it. 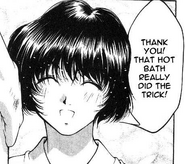 Thanks for the bath!

Argument over the futon

Get to know me too! 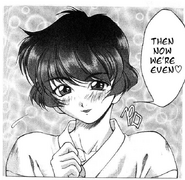 We are even~
Add a photo to this gallery
Retrieved from "https://aiyoriaoshi.fandom.com/wiki/Futon?oldid=4867"
Community content is available under CC-BY-SA unless otherwise noted.