Kaoru's scary face changes to a stern one and he says firmly that he cannot return to the Hanabishi Family, despite Aoi's pleading. Aoi, upon hearing that, starts crying. Miyabi tells her that she shouldn't always be a crybaby. Aoi begs Miyabi that she wants to stay with Kaoru for one more night and the latter agrees, on the condition that she stays here, too. When the trio are all asleep, Aoi calls Kaoru outside to talk. Aoi says how glad she was to meet Kaoru, but his decision not to be together with her is his so she can do nothing about it. She shivers in the cold while she says that and Kaoru puts his coat around her shoulders. He then explains that him leaving the Hanabishi Family was not due to Aoi, but for another reason. He informs Aoi the truth of why he left his family. He was the illegitimate child between his father (Yuji Hanabishi) and his mother (Kumi Honjo). His parents never got married since the Hanabishi were against their relationship. Due to his status as an illegitimate child, Kaoru was rejected by the Hanabishi family. However, when his father passed away when he was five, the Hanabishi family declared to his mother that they will adopt him at the funeral. Kaoru's mother accepted their proposal, as she wanted to spare her son from the harshness of the real world. Due to his desire to not worry his mother, Kaoru agreed to become the next heir of the Hanabishi family. Despite his obedience, his mother eventually left the family, much to his dismay. Regardless, Kaoru never felt like he was at home with the Hanabishis. A year after his mother passed away, his grandfather burned all of his mother's mementoes. Despite his protests, his grandfather succeeded of burning eveything except for one thing (a good luck charm). Although his grandfather demanded that he hand it over, Kaoru refused his demands. Angered by Kaoru's disobedience, his grandfather beat Kaoru with his cane. He scolded Kaoru for not recognizing his place as the next heir and that his behavior is a disgrace, considering everything the family had given him. He shows Aoi the lucky charm (the only item he was able to save) his mother gave him before she went away. Aoi, after hearing about his explanation, starts crying and says how much he must have suffered, hugging him. Kaoru states that it feels very peaceful, as it is like his mother hugging him. 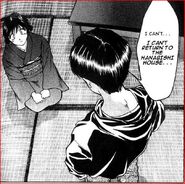 I want to talk with you

You must have suffered a lot....

Just like this.....
Add a photo to this gallery
Retrieved from "https://aiyoriaoshi.fandom.com/wiki/Refusal?oldid=4701"
Community content is available under CC-BY-SA unless otherwise noted.