Aoi says that she wants to be Kaoru's wife and wants him to go back to the Hanabishi family with her. Hearing that, Kaoru gets angry and thought Aoi was just being used by the Hanabishi to lure him back and tells her to go home immediately. Aoi feels sad and thought that Kaoru left the Hanabishi because of hatred towards her. She stands under a streetlight with nowhere to go. Just then, two men approach Aoi and Kaoru thinks they're here to pick her up. However, he soon realizes they aren't Hanabishi's people and rushes out to protect Aoi by lying that she is his wife. The two men give up and even told him not to leave Aoi waiting alone at night. The two apologize to each other and Aoi even cries as she was happy that Kaoru would even say she is his girl and that she is happy. Kaoru tells Aoi to go back with him to his home and rest. The two talk about their arranged marriage and how it was cancelled off suddenly, that's why Aoi came here. Aoi cries tears of joy when she found out that Kaoru did not leave the Hanabishi because he disliked her. Kaoru says Aoi can rest at his home and proceed to heat the water for a bath. Aoi then showered first, with Kaoru feeling awkward. He sees Aoi's clothes and started having nonsensical thoughts. He thinks that even Aoi is cute, her appearance was too sudden and he shouldn't be too happy.

Please come back with me! 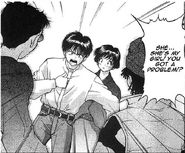 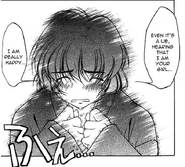 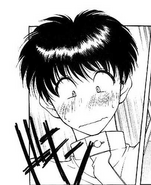 Nonsensical Thoughts Appears!
Add a photo to this gallery
Retrieved from "https://aiyoriaoshi.fandom.com/wiki/The_Unwedded_Couple?oldid=4693"
Community content is available under CC-BY-SA unless otherwise noted.